Neem.fr is a website for nature enthusiasts actively supporting the development and use of Neem. We promote public and professional awareness of Neem's many possible applications. 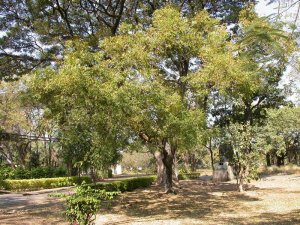 The Neem (Azadirachta Indica) is a holy tree with a lot of skills. It comes from the East Indies and more precisely from the South of the Himalayas.
A text of traditional medicine (Brihat Samhita de Varahamihira) even recommends planting a Neem tree near each house. The Hindu holy texts are about the sarve roga nirvarini which means: “the one who cures every disease”. In popular speech, the Neem is called: “the village’s pharmacy”!

Adapted to the poor soils, it tolerates high temperature as well as a low pluviometry. We find it in dry and semi-dry areas of Tropical Asia but also in Africa and Australia. Today, we cultivate it more and more in Central and South America (in Mexico), in the West Indies and even in Europe (The French Riviera) where it is appreciated as a charm tree.
The Neem grows quickly; it can reach 20 meters high and live 200 years.

Its pennata and lightly dentate leaves look a little like the ash tree’s ones (Fraxinus excelsior) and a lot like the soap tree’s ones (Sapindus Mukorossi). Its bark is brown and vertically fissured.
From May, some smelling, purple star-shaped flowers appear in the tree and they are arranged in descending cluster. They are transformed into edible little yellow fruits (which look like little apricots) that we harvest at the monsoon. Then they are dried in the sun before being ground. 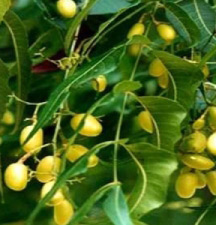 The Neem (Azadirachta Indica) is a tropical tree, Mahogany's cousin, known and venerated since the midsts of time in the Indies (it is called the "pharmacy of the village").
The Neem gives a little yellow fruit that is edible. It looks like an apricot and also has a seed with a kernel inside of it. This fruit is harvested at the monsoon and is dried up in the sun (pulp= about 10%). The processus of fabrication is very simple: after it has been dried in the sun, the fruits are subjected to a double grinding through a “rotary crusher” and a “pulveriser” (disc harrow). The obtained powder is sifted. For a commercial use, the powder will be compacted into pellets, more easy to be used with a sower. These little grains are then bagged.
The Neem fruit is the ideal fertilizer for the organic culture

In Brazil, all the fruit and vegetable producers but also all the distributors of farm products know the neem. Since 2001, we use it frequently to cure the animals and for the agriculture.
More infos...

The azadirachtin extract contained in the neem’seeds was very efficient against the larva that were destroying the foliages, against 13 species of lepidopterous insects and against sawflies.
More infos

When the tree reaches maturity, it can produce until 50Kg of fruits what is equivalent to 30Kg of seeds. These ones constitute the main source of components with some insecticidal properties as the azadirachtin. However, the quantity of azadirachtin contained in the seeds considerably changes according to the climatic conditions, the soil conditions and the genotype of the tree (Ermel 1986 ; Singh 1986).